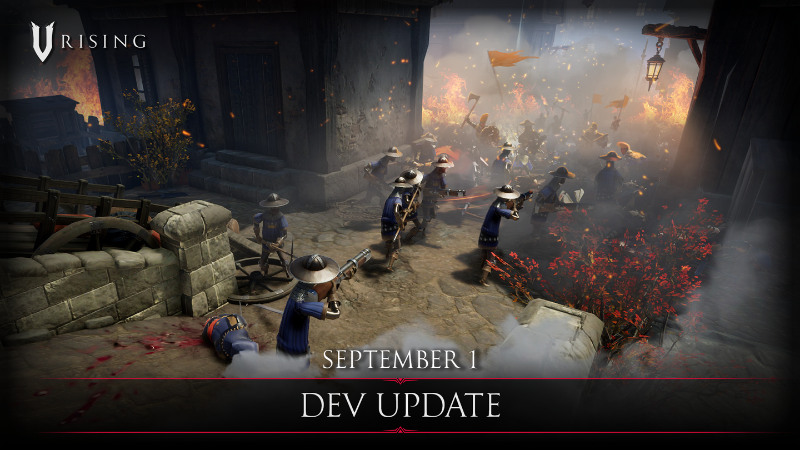 Welcome to another dev update! In this blog, we’ll be sharing some of what we learned from the first months of Early Access and planned improvements to the game as we move forward. We’re taking a peek into the future of Vardoran and what’s required for us to deliver on your darkest wishes. Many of our ideas are currently early in the production or planning phase, so please keep in mind that everything mentioned in our studio reports is subject to change.

Settle in with your bloody refreshment of choice, and let’s get started!

Early Access Learnings & Game Updates
First, we must thank you again for playing V Rising and supporting us! More than 2.5 Million vampires have awoken from the crypt, which is far beyond our expectations. This is amazing news for all V Rising fans, as it strengthens our decision to keep our focus on the game for the foreseeable future. There are a lot of chains rattling in the Stunlock crypt right now, and the evolution of V Rising has started! 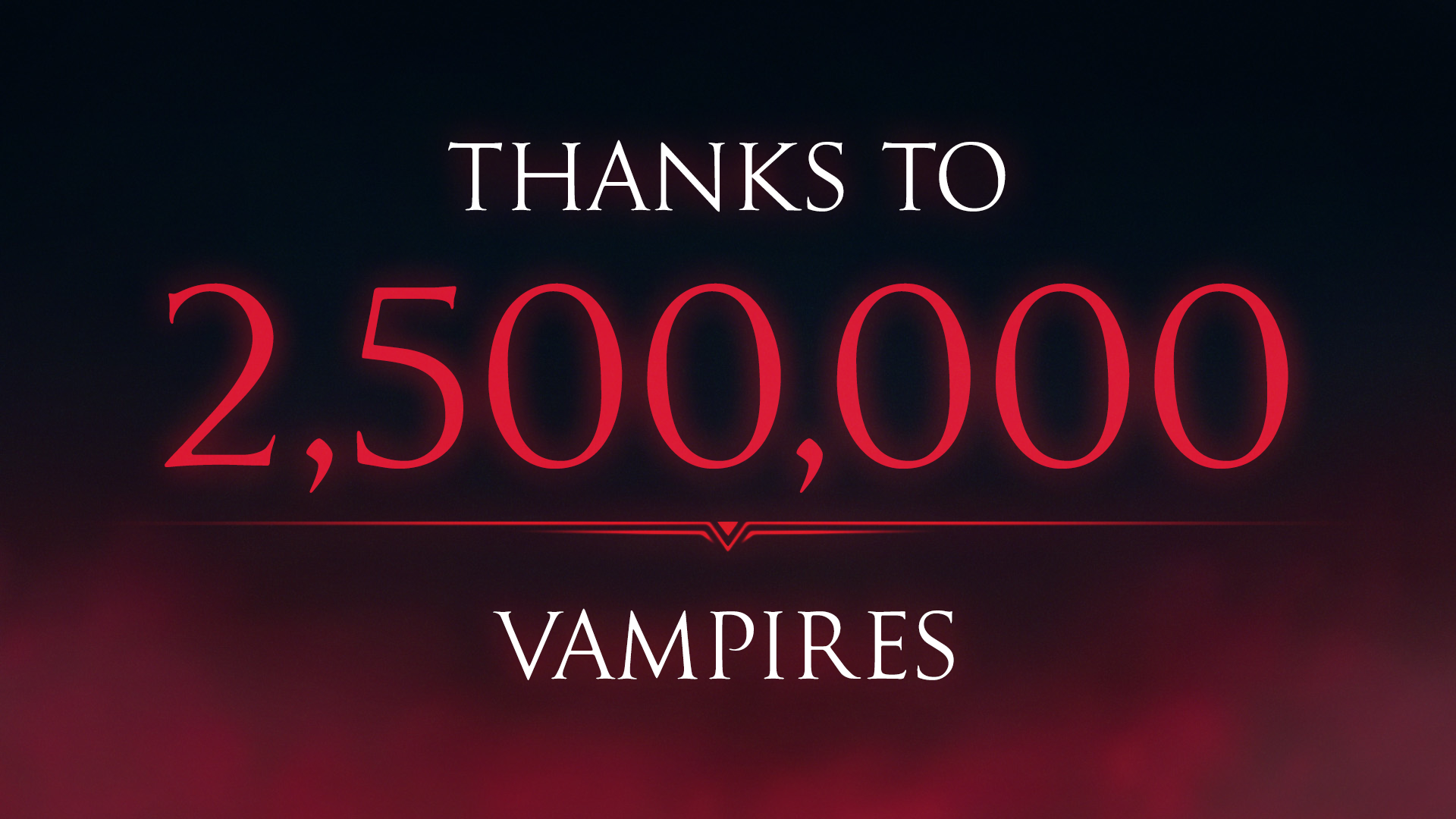 At Stunlock, we’ve carefully watched how you play our game and studied your feedback to find out what you want from the vampire experience. We want V Rising to be the best it can possibly be, and with that in mind, we’ve realized we’ll have to do some serious, deep systemic work on the game. V Rising is a complex project, and every added feature affects other loops of the game; significant changes require re-work and fixes across the board. While we were initially hoping to bring our first content update this year, we recognize that trying to push out content on old and outdated systems in the middle of a rework will only serve to slow down production time overall. Our first big content update for V Rising is now slated for 2023, and it will be massive! With that will come plenty of new features and content worth your time that also lay the groundwork for the game's future.

Throughout the rest of this dev update, we’ll be talking about some of the issues we’ve found and ways we’re looking at addressing them, as well as some of the wicked concepts we’ve been amusing ourselves with. While this dev blog is more general, you can expect a more in-depth deep dive into what we’re working on in the coming months and what we will be doing to shape the world of Vardoran into a suitable staging ground for your future vampire legend.

Improvements and Content
Even if it’s too early to confirm the content for the first big update, we want to give you insight into some of the things we’re working on and potential new features coming between now and the full release. We believe that V Rising has a strong foundation and want to improve on that rather than completely changing the game.

The Castle:
Many beautiful domains have been built, worthy of dreaded thrones, and we want to further enable your creativity. We understand the need for more flexibility and choices and want to ensure we satisfy all the architects out there. We’re looking into ways to more easily relocate your castle, add more cosmetic content, and create new ways to interact with your castle. 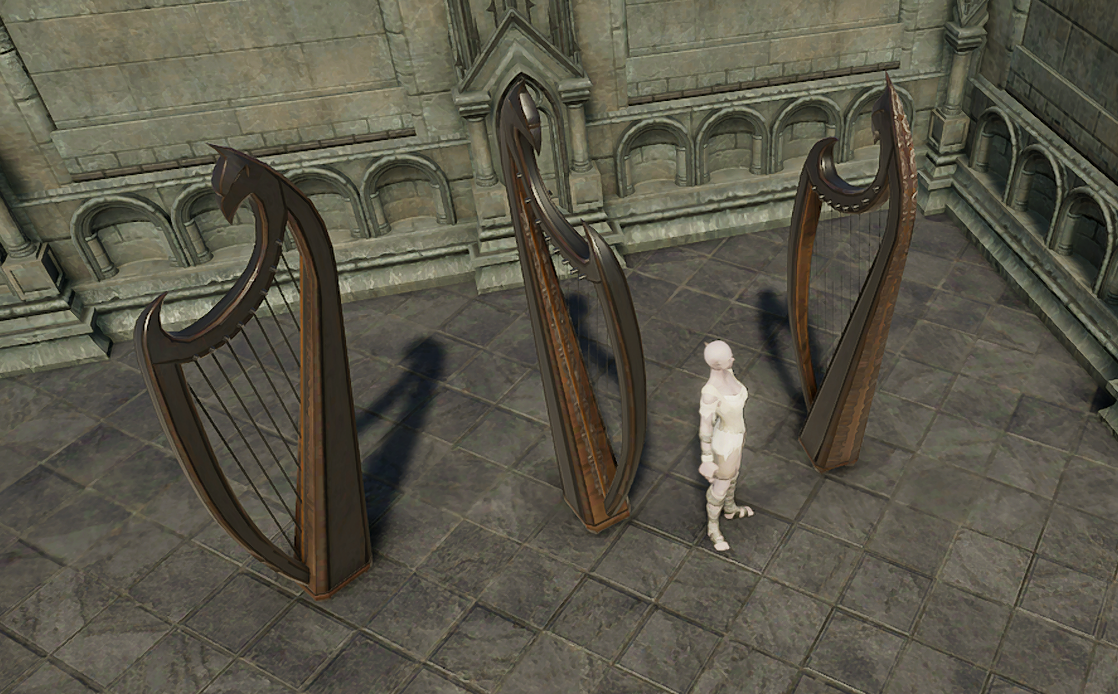 One feature that we’re exploring is adding multiple floors (two or more!) to the castle. The idea of massive dreaded spires and the thought of having a labyrinthian citadel with many different levels to explore is a part of the vampire fantasy, but the technical challenges have left us prioritizing other options up into the Early Access release. It’s still uncertain if this feature will end up in the game, but we will be experimenting with the various ways we may be able to implement it. It’s important that in our approach to mechanics that can be revolutionary like this one, it can be done in a way that preserves the things we already love about V Rising before committing to it. 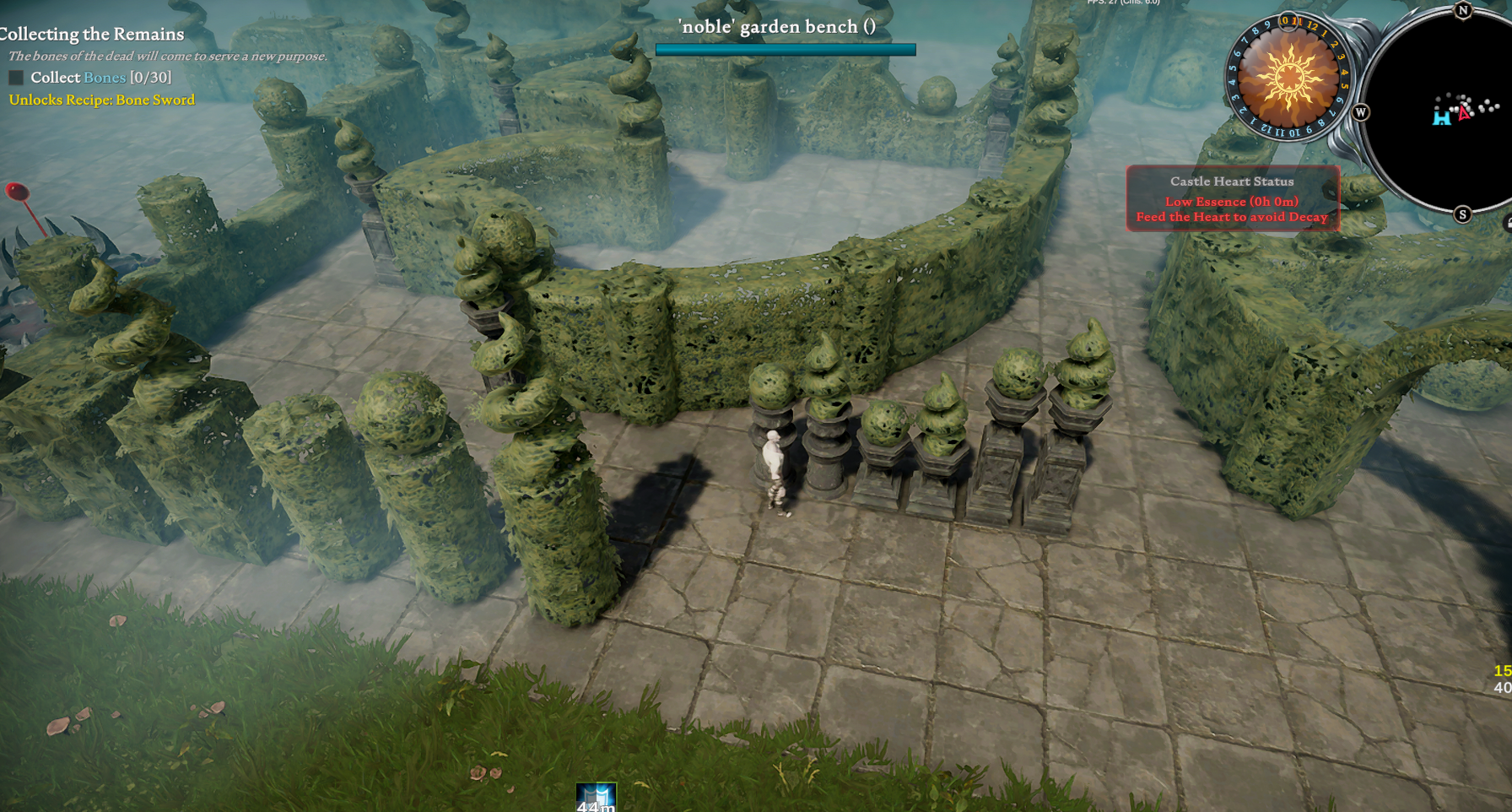 How about creating a more fancy garden?

Castle servants is another popular feature we wish to explore further. We’ve witnessed players using servants in all sorts of innovative ways, some of which are certainly more intended than others. Emergent gameplay like this and players’ reactions have given us some inspiration, but it’s too soon to say exactly how we intend to expand on the servant system. 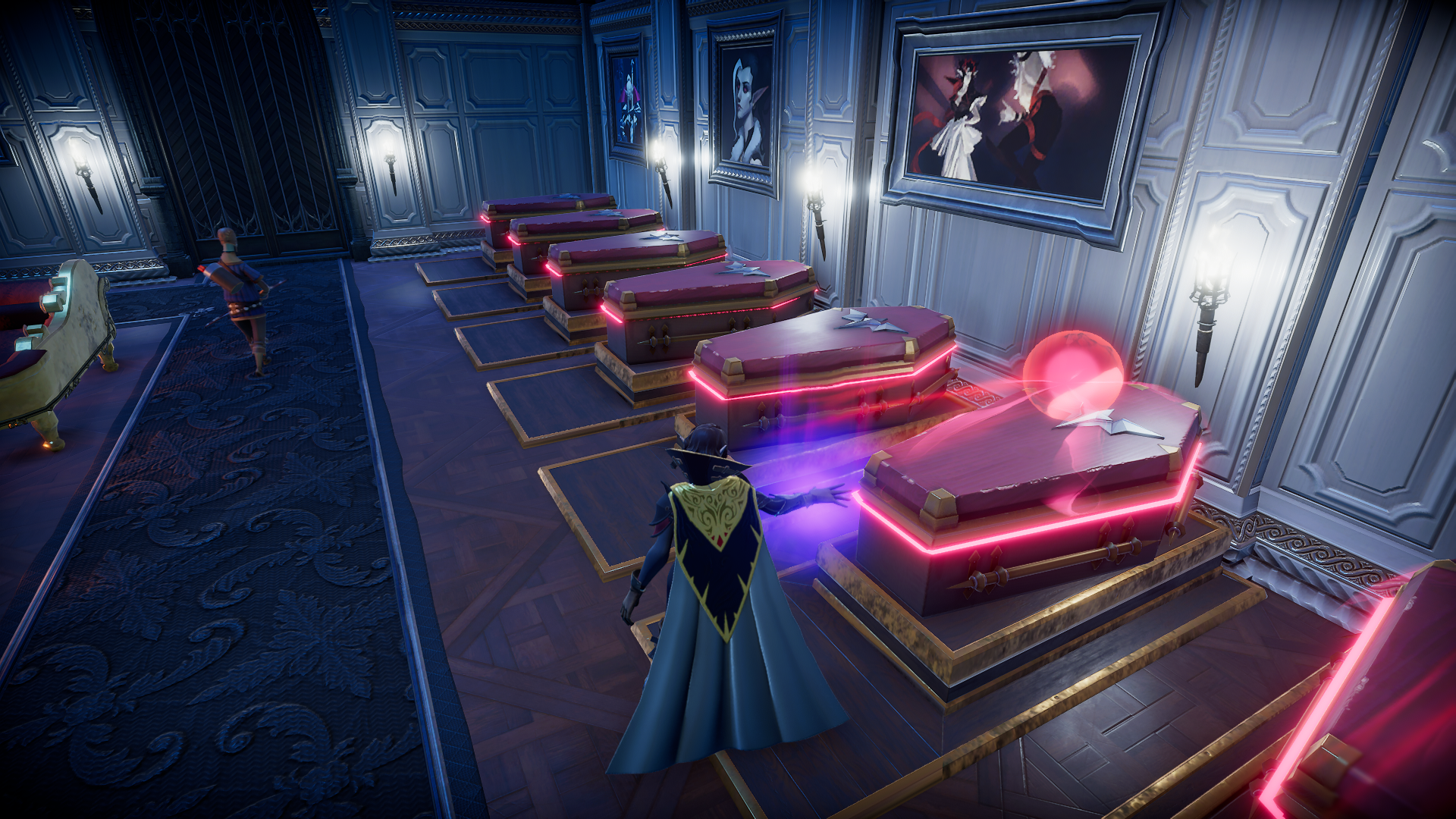 More ways to exert your will.

A New World:
We heard you desire new lands to explore, and we’re excited to bring more of Vardoran to you. There’s a brand new biome in the works that holds many secrets, mired in mystery and fresh, unique experiences. It’s important to us that every region offers something new in terms of visuals, sound, and gameplay. There will be more enemies to fight, bosses to defeat, and V Blood to drink in to fuel your hunt. We’re not only expanding the world; we think it’s just as important to improve the current biomes and ensure that your journey is more exciting and interesting than ever. 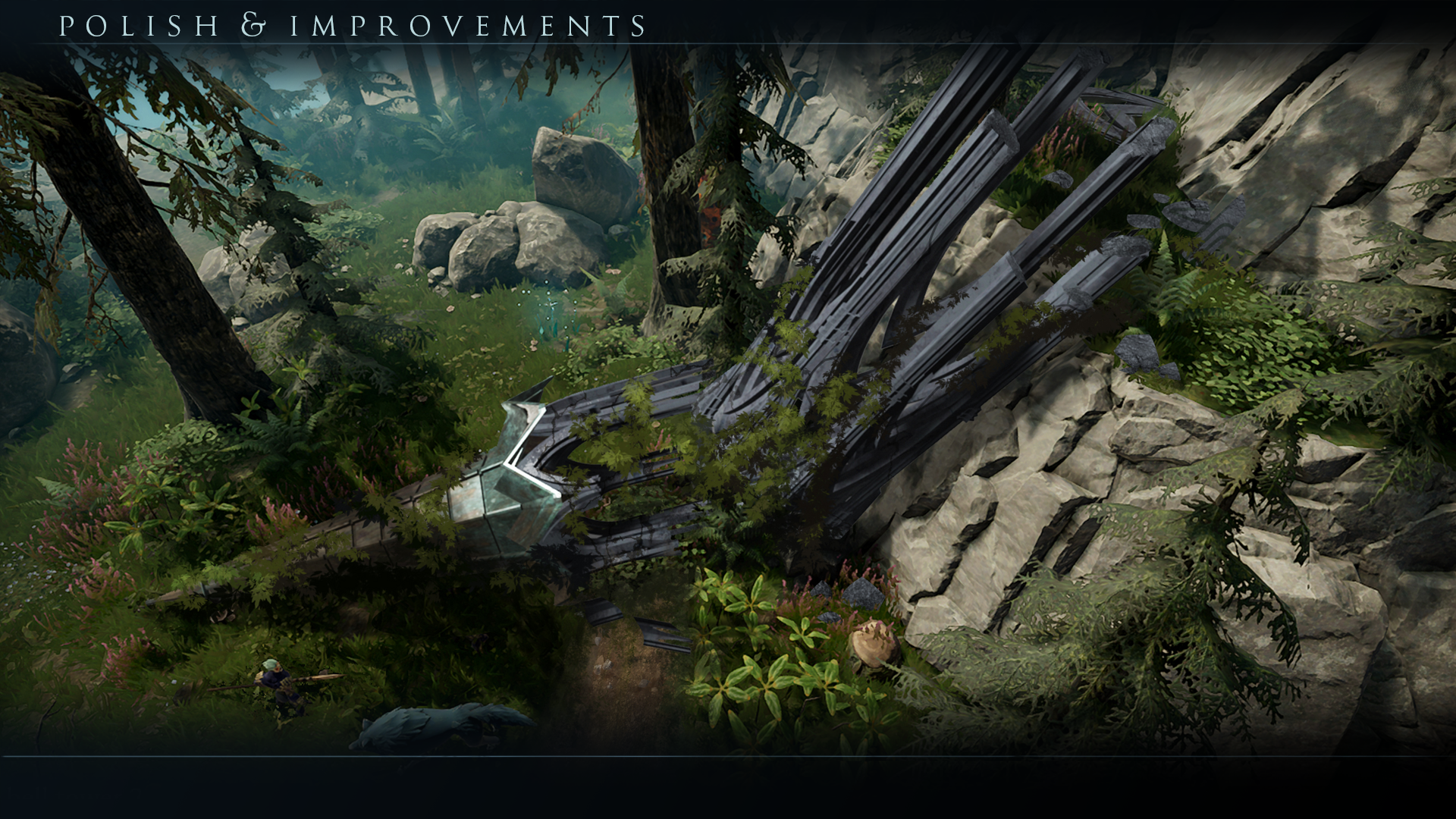 Concept of a world with more density, more depth.

Our teams have been looking at different ways to diversify and fill out our old areas with more engaging content, making them richer and more satisfying to explore. Points of interest and reasons to go out into the world will encourage more player interactions as well as liven the experience of play as a whole. Richer, vivid scenery adds diversity and character, further solidifying the mood and feel of each zone to be a unique experience from one another and also giving us room to seed in information about Vardoran and the cultures and history of the world to impart onto you. Expect new encounters, new discoveries, and new items to utilize! 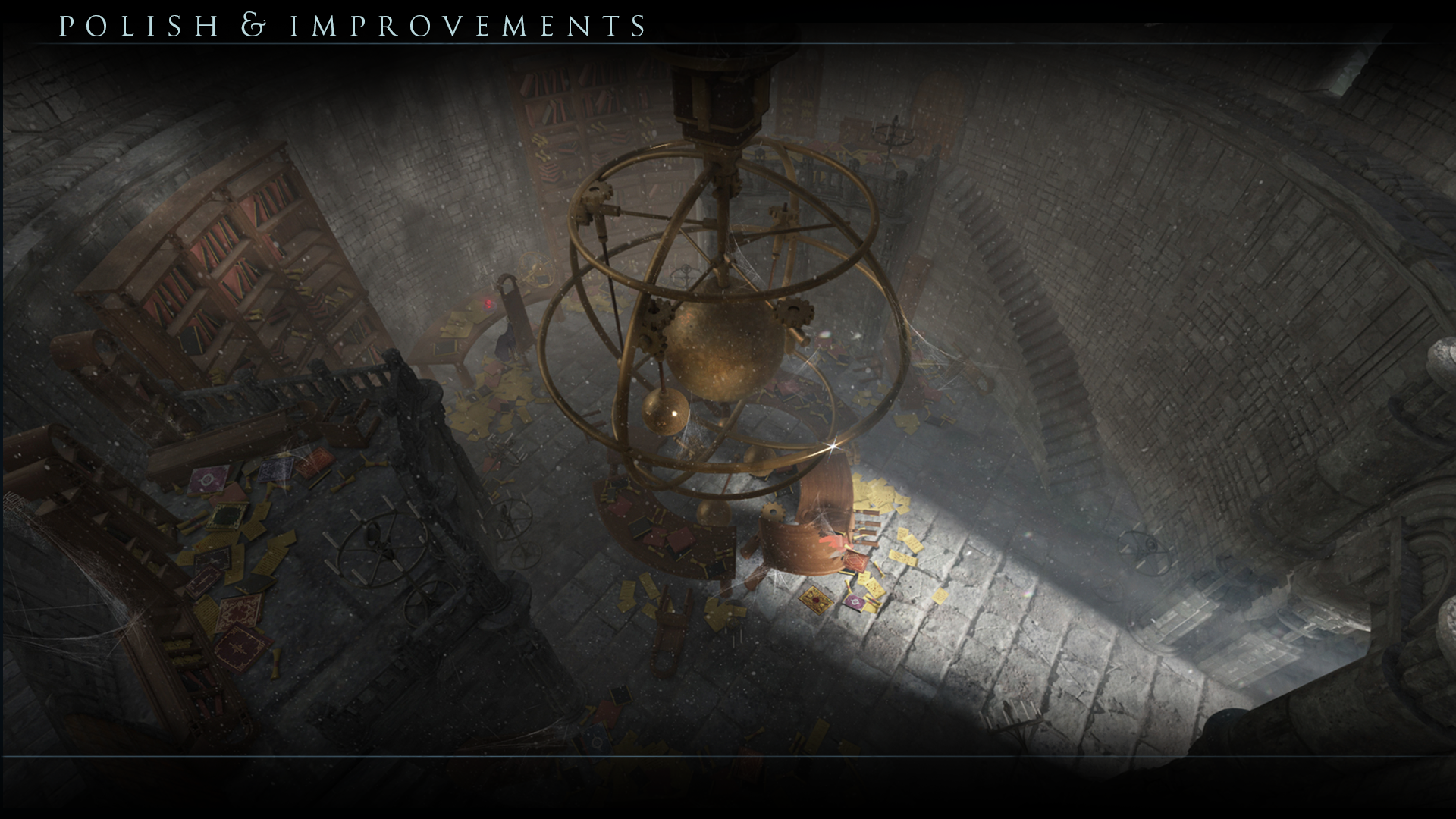 New Weapons & Abilities:
The more destructive tools you have at your disposal as a vampire, the more variation in both PvP and PvE, the more exciting gameplay! A common request is new weapons and abilities, and this is something we started working on and plan to deliver. Our game director, Peter, already spoiled one of the upcoming weapons during an interview on the Allcraft show with Asmongold: The Greatsword. It’s coming! Expect that, along with additional weapons and abilities, to add more depth and diversity to the battlefield. Another feature we will be experimenting with is adding a new layer of itemization. These new drops to hunt would let you modify your gear to augment and further customize your abilities.

The standard attack pattern for the Greatsword.

PvE improvements:
With a larger world to explore, we obviously need more things to fill it with! We’ve been brainstorming and started developing all sorts of different ideas to populate the world with not only more kinds of enemies but more interesting ones. Adding variety to the enemy types means bringing new mechanics that change not only the way you play the game but also the feel of earlier zones as you have to account for new and very different threats.

We’ve also heard you and know that certain parts of the game need improvements in pacing and rebalancing in things like repair costs and build costs. There’s lots of room to iterate on the game in that aspect, and we think giving attention to this will make the current endgame gameplay loop more satisfying and robust. 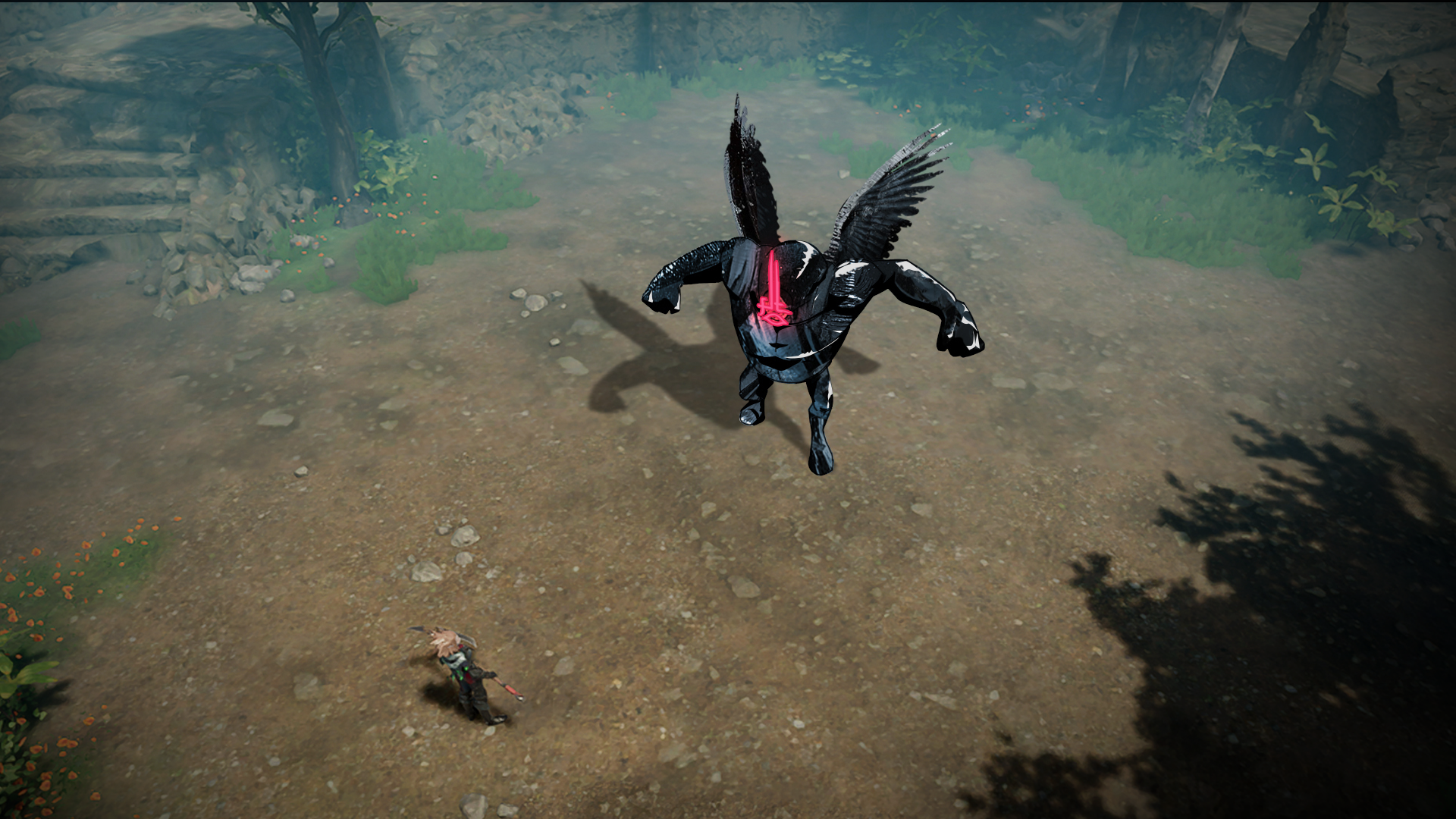 I wonder where this could be from?

PvP improvements:
The early access period has given us a ton of data to work with regarding PvP. Observing your gameplay and getting your feedback has been invaluable to us. V Rising is a game with many intertwined systems and improvements to things like placement, new weapons, and abilities; these are naturally massive improvements to PvP as well. With time we wish to tackle the raiding system, and we feel there are many ways to improve and flesh it out into something more robust and satisfying. We want this to be something that keeps all of you competitive players busy and excited in the late-game stages. We’re also looking into what a Castle Territory means for the player and planning to solve exploits that can improve the PvP experience, as well as eliminate some methods of PvE griefing.

General improvements:
There’s a variety of improvements for us to work on based on both feedback we’ve seen and things we want to add, and ways we want to expand on for the game. For instance, we recognize the awkwardness of the paper press in the current progression. We want to move it to a new V Blood unit that makes it easier for players to choose when they want to hunt it down and gain the ability to invest in research. A solution that brings more player agency to the journey.

Fishing is a bit bare-bones, and we’d like to make the whole fishing system significantly more polished and enjoyable. We’d like to add more ways to automate your castle, possibly something that can be tied in with servants to otherwise increase the effectiveness of managing your castle. In this way, we can make the entire building, crafting, and progression experience of V Rising more fun to engage with without abandoning the survival aspects of the game. 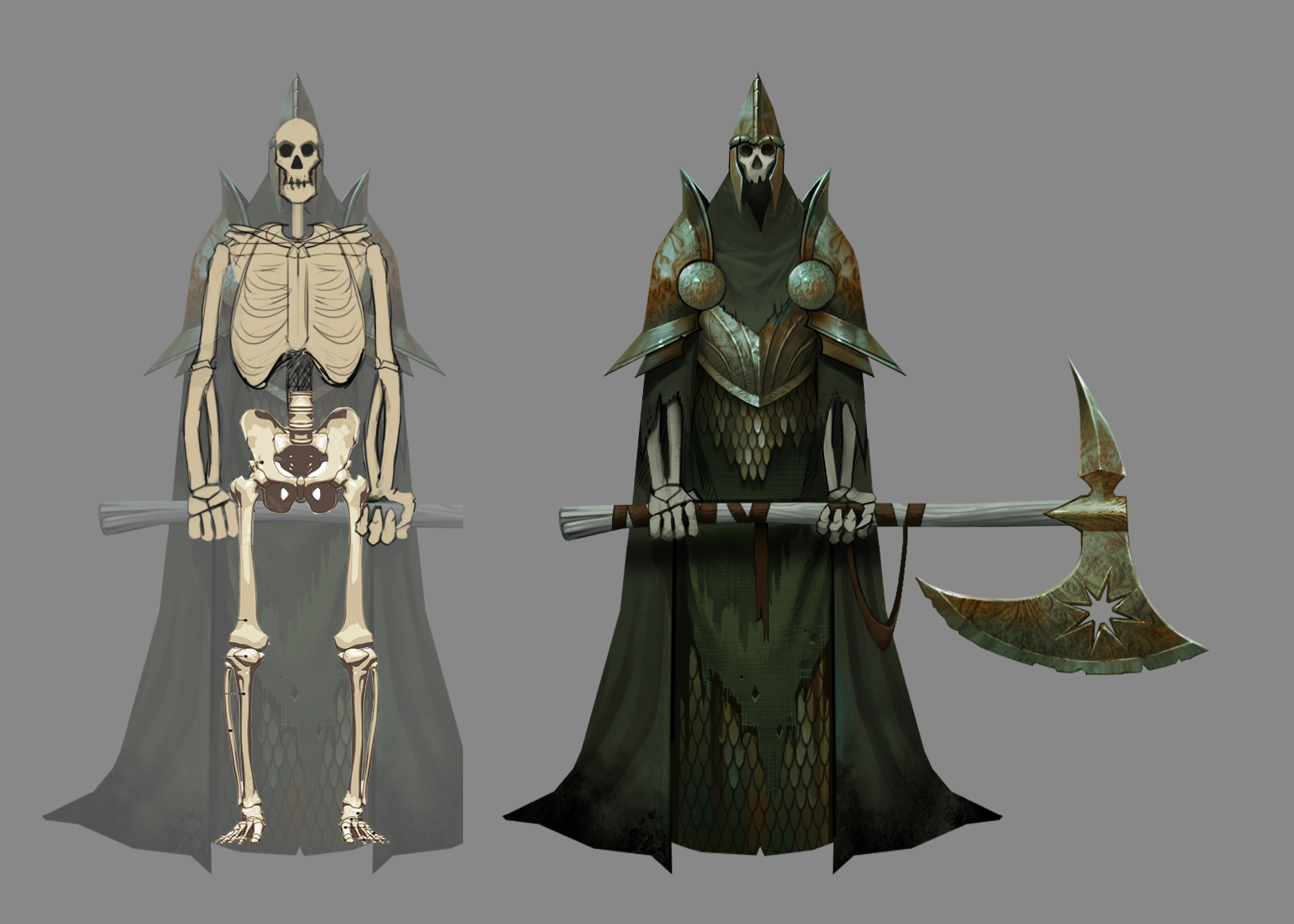 Another kind of dead.

Sound is another area we will be working on, which brings even more atmosphere and diversity to the world. We’re both improving the existing soundscape and expanding the Vardoran experience with additional music and layers of ambiance. Players might also be happy to know that we’re looking into adding controller support, and we’re increasingly confident that it’s something that will be possible for us. This would be a major step in the direction of being able to port to consoles and other platforms, as well as offer better support for Steamdeck.

Other quality of life features like making world traversal easier and more engaging, inventory improvements, or ways to carry more loot from place to place if you invest in the ability to do so are also on our list. These are just a few of many general improvements coming!

Marketing & Community:
As with game production, there is also a lot of effort behind V Rising’s marketing machine, and we couldn’t be happier with the results from our Early Access launch campaigns. More than 2.5 Million copies sold within three months places V Rising among the best-selling PC games in 2022. Last week we visited Gamescom with a presence both in the entertainment area and the business section. Besides connecting with fans and expanding our brand awareness, there were meetings with potential partners and collaborators who can help us bring V Rising to new markets and regions.

Focusing on massive “expansion-ish” patches gives the marketing team more time to build strong campaigns to ensure that everyone will hear about the next update both before and when it lands. While we’re preparing the promotional fireworks, we will simultaneously continue to support our community and drop dev blogs with the latest news from inside Stunlock Studios! 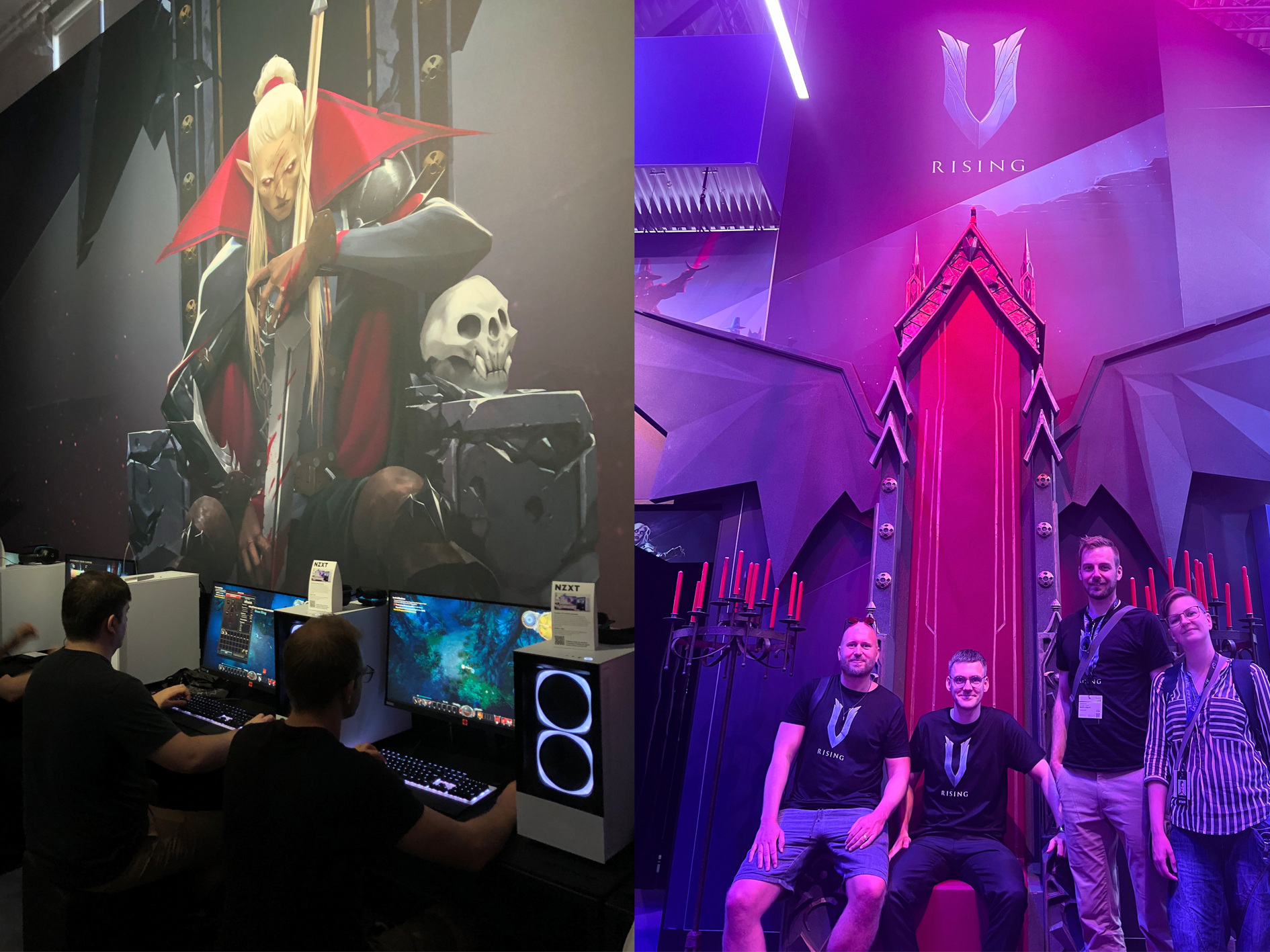 Thank you to all who had the chance to visit our V Rising booth at Gamescom!

Look Forward to the Future

We hope this gives you a hint of what is coming, and we can’t wait to reveal more in the coming months. There are still questions about the dark master, the overlord of all vampires, Dracula. Will he return to Vardoran? Our finest prophets promise he will, but we still don’t know when or what dreaded form he will take. What we do know is that the future of the vampire is something to look forward to!

Until next time, bloodsuckers.


Lots of love and a pint of blood,

Read the original Dev Blog on our website: https://blog.stunlock.com/dev-update-15-future-visions/